Commercializing Almond mild production has outweighed the nutritional benefits of the milk because of the damage caused to the environment.

It’s important to note the edible nut is a popular snack and can make various domestic products. Almond milk is one such product that requires huge nuts to make it a viable commercial venture.

Vegans consider almond milk as a suitable substitute for cow’s milk. Since the milk does not contain soya, more people are embracing it for various reasons.

The milk is multipurpose and is used in baking and making coffee. The spotlight is on the environmental impact of growing almonds to satisfy the growing demand for its milk.

Commercial growing of almonds for milk production is taking shape across the globe, and it requires vast lands and sufficient surface water for its growth.

In California, an irrigation system is already in place to support its growth. The New York Times shows it will take 15 gallons to grow 16 almonds.

Hence, almonds have proven to be one of the most water-intensive crops to grow in America.

Many critics of almond milk have taken up the issue demonstrating the nutritional benefits of almonds; they do not justify the damage almond growth causes to the environment.

For instance, it’s estimated 2 billion almonds are grown in California yearly. Now you can see the amount of water diverted for its growth and the reason it’s raising the alarm.

Since almonds are grown on natural land that was previously untouched or vast farms that used to produce water crops, the dramatic change in land use and increased water demands have led to environmentalists raising the alarm.

Forbes is on the record quoting about 23,000 acres of virgin land being converted to almond farms. Sixteen thousands of the acreage is wet, which causes more harm to the environment than the nutritional value of almond milk.

In California, where most of the almond growing occurs, the San Joaquin Valley is sinking yearly to deplete underground water reserves.

For farmers who rely on irrigation to water their orchards, they are facing a devastating water shortage.

Residents of California are feeling the heat as underground water is becoming scarce, leading to a lack of drinking water.

Almond farms also use a lot of pesticides, which further harm the environment.

Commercial growing of almonds is contaminating water and other natural resources surrounding the farms.

Contamination of the already limited resources is causing a strain among the farming communities.

The copious amount needed to make the commercial growing of almonds a viable venture is ravaging the environment drastically.

Imagine 2,000 gallons of clean water are required to grow a pound of almonds to maturity.

Remember, almond milk is essentially water, and there are only a few servings of almonds in a liter of the precious milk.

With the rising demand for almond milk, more and more companies and large-scale farmers are venturing into the business, hoping to make millions of dollars in profits.

The increased popularity is raising the alarm among environmentalists as its growth is not sustainable.

Peanut consumption outweighs that of almonds by far and generates more income for the economy.

But, commercial growing of peanuts requires less water compared to almonds by far.

To further put almonds’ water requirements into perspective, growing one orange needs 14 gallons of water, and one potato requires 100 gallons.

Still, almond milk production requires more water than all the dairy alternatives you can imagine.

Pesticide Use and Almond Growing

Farmers need to spread almond orchards with dangerous chemicals to protect the plant from mites, ants, and twig bore invasion.

Without the chemicals, almond yields would be significantly reduced, and it would no longer be viable for commercial growing.

Almond growing handles the over 34 million active compounds sprayed across California. It accounts for a 15% increase in the pesticides used in farming.

Almond farms also use more chemicals in controlling weeds in their farms which further causes harm to the environment.

Methoxyfenozide is a common insecticide commonly used in almond farms, and it’s toxic to bees.

Bifenthrin and abamectin are also used in some farms, which further harm bees and, as a result, flowering plants.

Since almond plants are susceptible to foliar and bloom diseases, they are often sprayed when their flowers bloom.

The practice further harms honey bees since 1.6 million colonies of bees get affected during the blooming season.

Bees are an integral part of a thriving environment thanks to their role in pollinating food crops.

If we are losing millions of bees every to almond farming, it’s time to reconsider, as it’s exposing people to diseases and loss of habitat to bees.

Honey bees from the western honeybee colonies have been declining since 2006, with commercial bee farmers recording losses consistently.

It’s time to reconsider on industrial use of pesticides, as their exposure will lead to the extinction of bees in the next ten years.

Almond farms require the bees for pollination, and their existence contributes to the honeybees’ massive die-offs.

For successful pollination of almond farms, honey bees leave their winter dormancy early by up to two months, putting them under more stress.

The little groundwater left in Central California is being undermined by extraction for the almond plantation water system and fertilizer contamination, which can spike drinking water with unsafe nitrate throughout the entire state.

In contrast to different yields, the deciduous almond tree needs an abundance of nitrogen to reestablish and strengthen fruiting wood.

This substance component is straightforwardly connected to creation, and in a plantation climate, the trees commonly get it through manures.

The application of nitrogen-rich composts can taint soil and groundwater with a harmful compound that can expand veins and lower blood pressure when burned through enormous amounts.

Undeniable degrees of nitrate in drinking water (i.e., over the Ecological Insurance Office’s norm of 10 milligrams for every liter) is unsafe for babies and pregnant women.

It can likewise harm animals and natural life since it has no perceptible taste or smell.

Almond trees drop their leaves every year. All the nitrogen put away in that natural material can be filtered into soil and groundwater, particularly if it’s hit with an abrupt shower. 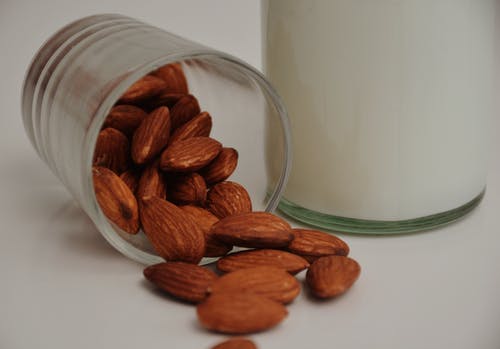 Moving honey bees on a large scale creates a problem of environmental pollution due to carbon emissions.

For almond farms to thrive, they need to transport colonies of honey bees to the orchards to facilitate pollination.

California uses 60% of all the honey bee hives only for almond pollinating each winter.

Lending the importance of the pollinators to this rewarding harvest currently forms much of the average beekeeper’s income.

The honey bees make a trip from one coast to another, pollinating whatever is in season: Washington’s cherry plantations in spring, Florida oranges and Michigan blueberries in the late spring, and around 90 other crops.

Then, at that point, they overwinter in the hottest pieces of the nation—Texas, Florida, or California—and leave on their human-helped relocation of yield fertilization again by Valentine’s Day.

While the interaction is fundamental for advanced food creation, it’s been reprimanded for putting monstrous weight on the honeybees, which would ordinarily spend the colder time of year resting if they were in nature.

The relocation of honey bees tremendously affects the climate, as the transportation area is currently the top homegrown ozone-depleting substance emitter.

Unexpectedly, cultivating rehearses related to inexhaustible biofuel crops that could diminish the effect of moving oversaw honey bee provinces could represent a wellbeing hazard to the honey bees.

To conclude, the discussion on the environmental impact of almond production for its milk shows that very few almonds are needed to produce a gallon of its milk.

Almond milk is high in additives such as sugar and thickeners. As a result, the adverse effects of the additives further outweigh the benefits of almond milk.

Although one can lower the environmental degradation of almond milk production by making it home, you cannot wipe away its destructive footprint during growth.

So, addressing the critical question, “is almond milk good for the environment?” The answer is a big no.

The negative impact of its growth easily outweighs the benefits of almond milk.

Although the economy is benefiting from the millions of dollars it gets in taxes.

The environment is hurting. Chemicals are used to poison the soil and water, lowering the productivity of an area for a long time.

While some argue almond trees are essential in cleaning the air by releasing oxygen and removing carbon dioxide, it’s a small benefit compared to its destructive trail.

The commercial growing of almonds should be controlled by the authorities to preserve the environment for future generations.

You cannot ignore the many chemicals used, bees killed, and vast amounts of water used to grow crops.

Alternatively, we must find an alternative source of milk if we opt to keep dairy products as almond milk is hurting us in more ways than we can imagine.